The KingSpec NVMe 22*30 Solid State Drive is capable of reaching read speeds of up to 3621.35 MB/s and write speeds of up to 2314.32 MB/s. These speeds are significantly faster than those of a traditional hard drive, which can typically reach speeds of around 100 MB/s. This means that the KingSpec NVMe drive is able to access and transfer data much more quickly, resulting in faster boot times and faster launching of software.

For example, let’s say you have a large software application that you need to install. With a traditional hard drive, it might take several minutes to complete the installation process. With the KingSpec NVMe drive, however, the installation process would be much faster, as the drive is able to access and transfer the necessary data at much higher speeds.

In general, the faster read and write speeds of the KingSpec NVMe drive make it an excellent choice for those who want to improve the overall performance of their computer. Whether you’re a gamer looking to load levels faster, a creative professional working with large files, or just someone who wants a smoother, more responsive computing experience, this drive is sure to deliver.

The CrystalDiskMark benchmark software runs a series of tests on the storage to see its performance across different read/write patterns. The results show the optimal maximum reading and writing speeds on the first row. 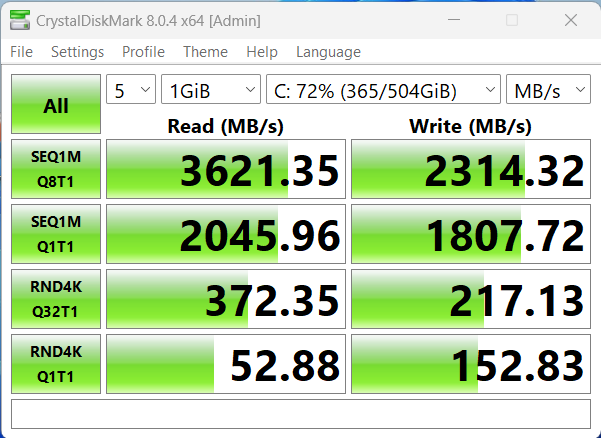