Add this product to cart for a FREE Protective Case
24 reviews
Availability:

Playing the latest games, the ONEXPLAYER AMD is the perfect choice for a gaming handheld. 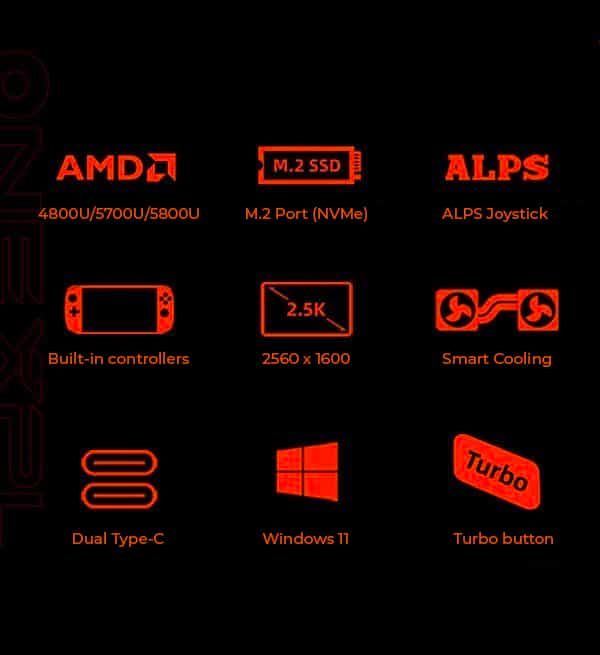 One for the RED Team

It can handle Chrome!

And for storing your game library, the ONEXPLAYER AMD handheld comes with 1TB of PCIe 3.0×4 NVMe. Experience speeds up to 2400MB/s

Amazing for an Handheld

In terms of power, you won’t be disappointed – The ONEXPLAYER AMD packs a massive 15,300 mAh Battery rated at 3.85V.

And to keep it topped up, in the box you’ll find a 65W PD-Compatible Charger.

Upgrade to the Latest Windows

Coming with Windows 10 Home, the ONEXPLAYER AMD handheld game console  will be updated to Windows 11  for free

Stunning Graphics, in your hands

Not only do you get a powerful processor, the ONEXPLAYER AMD Gaming Handheld comes with the AMD Radeon Graphics chip built-in. This means you can play many Titles at native 2.5K Resolution with High Settings.

AMD has done a lot in terms of Gaming, and it shows on the ONEXPLAYER. More titles are available and games released in the recent years can play at respectable FPS.

This portable gaming handheld can also emulate Retro Gaming Titles with ease, allowing you to even emulate PlayStation 3 titles. This is a breakthrough in computing, especially in this form-factor.

Now would you look at that? The ONEXPLAYER AMD screen is a stunning 8.4″ IPS Display. This covers 100% of the sRGB Color Gamut and it has a 178 degrees viewing angle. The sharp contrast and popping colours is something One Netbook are known for and the ONEXPLAYER AMD Handheld delivers!

The 8.4″ Display is also a touch-screen with 10 points of recognition and is compatible with the One Netbook Stylus.

The ONEXPLAYER AMD Handheld is a fully thought-out game console and the Gaming Experience is top-notch. Apart from the beautiful display, you have all the tools you need to get your game on!

Also present is a button to invoke the software keyboard for quick in-game chat.

How do you start? With the start button (yes, we thought about that joke), and you’re also getting a back button.

The ONEXPLAYER AMD handheld console also comes with a Turbo button – Press it! 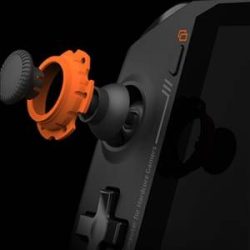 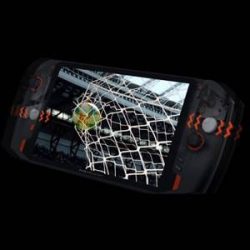 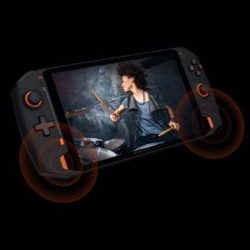 I picked this up after owning and using a Steam Deck for 3 months and for my specific use case it's a great little device.
I love the screen, the kickstand, optional fold up keyboard that fits inside the case and a bluetooth mouse to navigate Windows 11 with, all in all makes a nice portable setup.
The out of box user experience takes a bit of getting used to, but since I'm using this for emulation and for playing older non Steam games it's really a great experience.
I'm using Bigbox as a frontend for emulation and for pc games and when I'm finished installing everything I'll boot directly into Bigbox to avoid Windows.
The AMD 5800u is power hungry with it's 8 cores 16 threads but the fast charger makes topping off the battery a non issue.
For me it's a great addition to my Steam Deck and fills in the gaps that the Steam Deck has. The analog joysticks and analog triggers make older racing games a joy to play. Dpad is not so good and is the weakest part of the system. For me and my use case it's worth it and I'm happy that I bought it. Overall great experience with Droix, I will buy from them again in the future as my needs arise

I wouldn't recommend for everyone as there is a bit of legwork required to get some games working on this, but when you do it's a great experience.

The console feels incredibly well built and is a bit of a chonky unit. No creaks or movement of any part except the buttons as expected.

What cannot be understated is the quality of the screen on this. I've seen many reviews saying the resolution is wasted but that isn't true with some tweaking you can get games running really well. I have Elden aring running at Max graphics at 1080p at a solid 30fps with turbo mode on. The clarity and colours of the screen are amazing. I was a little worried as I'm an OLED lover but this is the best IPS I've seen. Decent blacks, great colours and minimal backlight bleed.

It never feels hot or warm in the hand and the fan is a manageable volume at full speed, does a super job of kicking the heat out of the top.

The only negative I would say with the device is that it's quite heavy and with smaller hands feels a bit of a reach for the shoulder buttons.

Droix were awesome, super fast DPD delivery, case was a freebie, and they also put in a decent UK power supply (which I actually was going to buy from them at £20!).

Overall great experience. I can't put this thing down.

I don't own a steamdeck, but have had the use of one for a week, this thing while admittedly is much more expensive is just night and day ahead of it. It's worth the extra. More storage, a way better and bigger screen (the screen on the steam deck is relatively poor), a much better quality feeling device, and I'm able to play games in better graphics and resolution. Plus I can easily use games from across all the storefronts, epic, gog, origin etc.

Excellent handheld that plays Steam titles easily
Image quality great with very little lag and only occasionally.
Great back up to my laptop and as enjoyable

I was dubious how an onboard GPU could possibly handle AAA games but the new intel Iris chip is very impressive.

Due to the Steam Deck being delayed until end of October for my order I became impatient and really liked the looks of this device due to its larger screen. I am very happy I decided to go with the OneXplayer 1s. So far I haven't had any issues which others have reported with the intel chipset drivers which may be because of recent driver updates.

I now have more time for casual gaming because of the portability of the device and not having to sit at my desktop or pull out the laptop, so finally trying some of older games and indie games in my Steam library that I have accumulated over the years but never played.

So far I have tried a mix recent and old AAA games and Indie games without any issues. The only issue for me is because i'm an old PC Gamer and not used to using controllers for FPS games it would be nice to have had a tilt sensor which I think might make FPS games easier for aiming, and a built in touch pad for playing management sims and RTS games. But i'm tinkering with settings so getting used to the controls. The only other issue which is more annoying is the SD Card reader speed, R/W is around 20-30MB which is ok for running emulator games but would have been nice to be able to buy a 1TB SD card with fast 100MB+ RW speeds to expand storage.

Another great feature with the intel model is the ability to add an EGPU so I plan on setting it up to my TV with an EGPU and couple of Xbox controllers to turn it into a family console.

I have played GTA V and also tried Elite Dangerous on this and the heat pipes and fans on this thing do a great job. At no point has the device at the back become hot and the fan noise is very quiet IMO.

I am loving this device, powerful enough and super convenient for casual gaming.

I expected the OXP 4800U to be good but so far its very much exceeded my expectations.

I've got a SteamDeck on reserve but its an age away and I wanted something to PC game on the go now. After much research I'd Settled on and Aya Neo because the AMD APUs appeared better than the Intel ones. And then I noticed something, the OXP comes with a micro SD, Not sure how I missed that on my research. So that swung it.. The 5700U models were out of my price range but the 4800U was perfect. There are tools that let you tweak the TDP and the clock speeds so you can tailor the performance, but so far I've not needed to.

The OXP is pretty massive, but for lap gaming its perfect. Not sure you'd play it holding above your head in bed.

The display is brilliant, the APU will struggle to display the screen at native resolution for the most modern AAA titles but if you don't mind tweaking games you'll get a very playable experience. I've found aiming for SteamDeck type settings gets the most out of the OXP. So I aim for 720p or 800p, low to medium settings and run in power saving mode, so the CPU rarely pulls more than 15W which means very good battery life and @30+ fps in AAA games and massive frames in indies, so worth locking them to 60fps which will reduce the power even more.

Install a mix of big budget games and indie and use the conservative settings and you'll have hours of gameplay in the palm of your hands.

Not only can you run your Steam library but you can use your Origin, Epic, Amazon games and GoG all on one device. Currently I'm running my Epic games on a 512gb SD and also some rpcs3 emulation.

My biggest bit of advice is pay the extra for the carry case, its a tight fit but it protects the OXP perfectly.

Worst thing about the console isn't the console itself, its the 65W charger. 1. the supplied USB is too short, could do with a decent 3mtr one (which I bought, make sure its a PD capable one). 2. the charger itself is very small (presumable its one of these never gallium nitride GaN ones) but it doesn't get very hot and it charges brilliantly fast. But the biggest issue I have is the UK adaptor, which is a pretty lose fit so you find the charger starts to come away from the adaptor after a short time in the wall although its never stopped charging. I'd suggest getting a spot of glue to hold it tightly in place.

The OXP came supplied with Windows 11, which I planned on upgrading too so this saved me some time. Its still a little unstable in that i've had a couple of apps stop working and the only fix was uninstall and reinstall. One of these apps being FxSound audio enhancer, which I suggest you try as it really improves the quality of the sound from the OXP.

I aim to create a channel mostly dedicated to showing the resolution I use for best balance of fidelity/fps and battery life so keep your eyes peeled.